Learning & Growing Together To Be The Best We Can Be 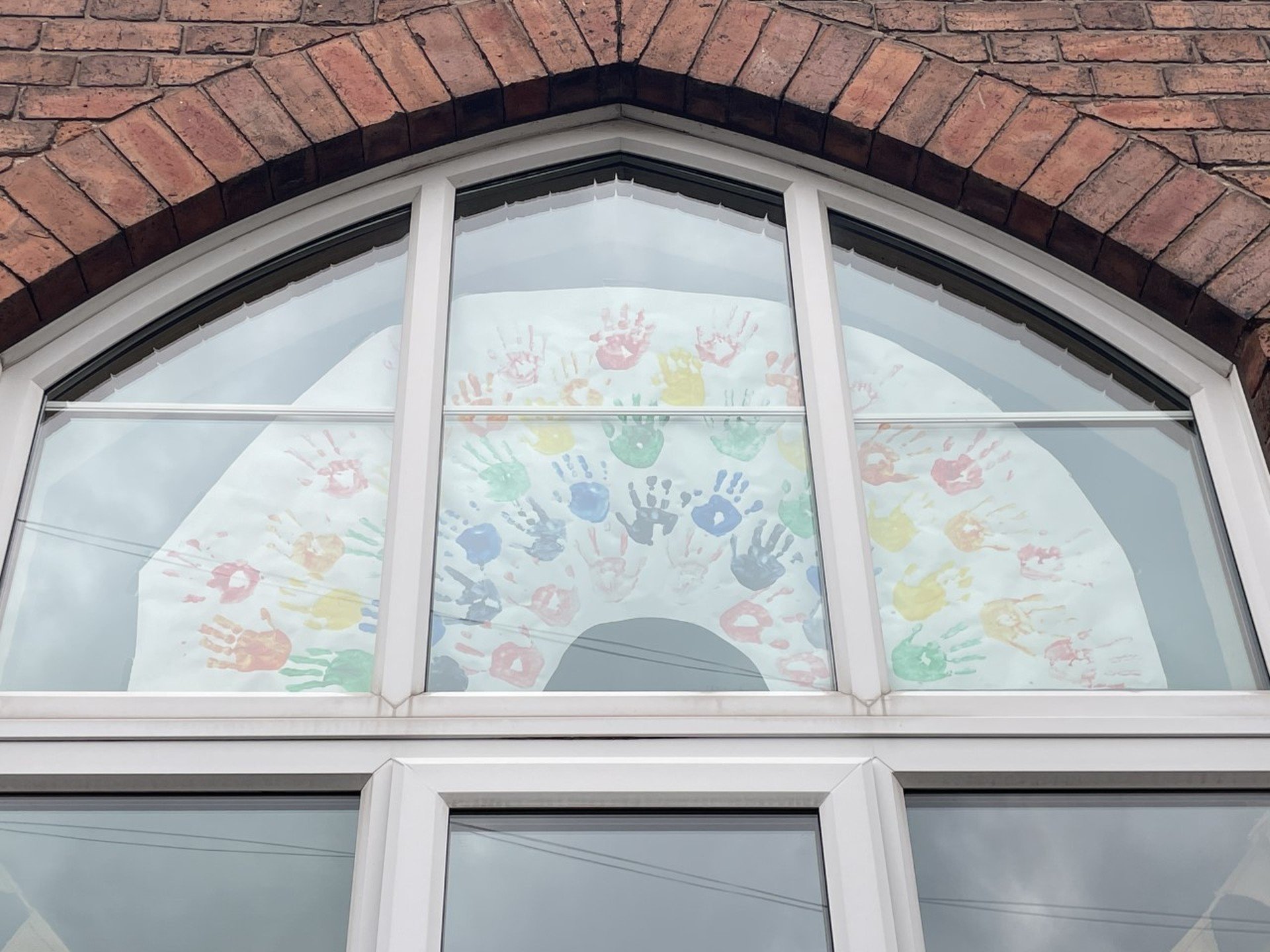 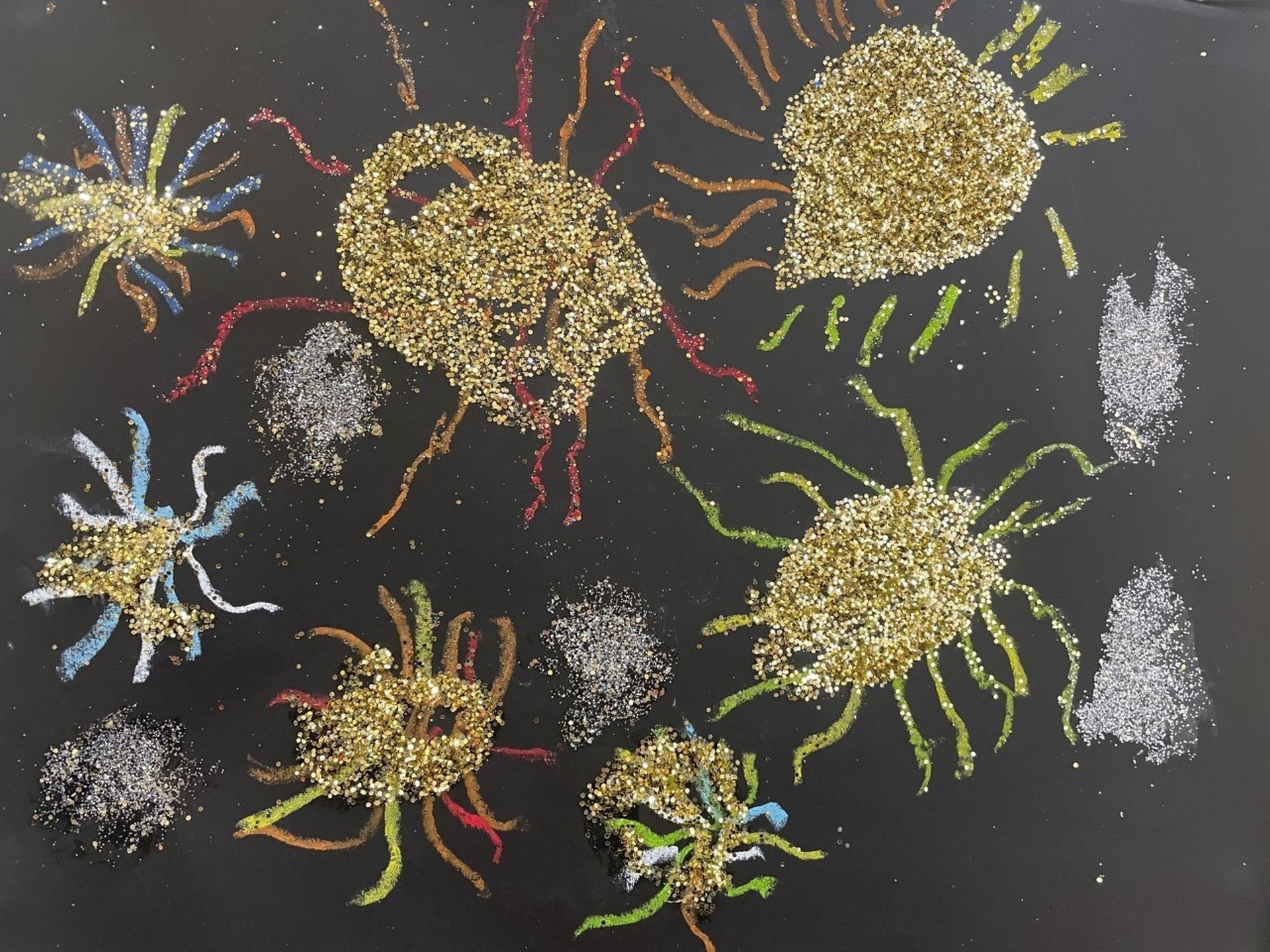 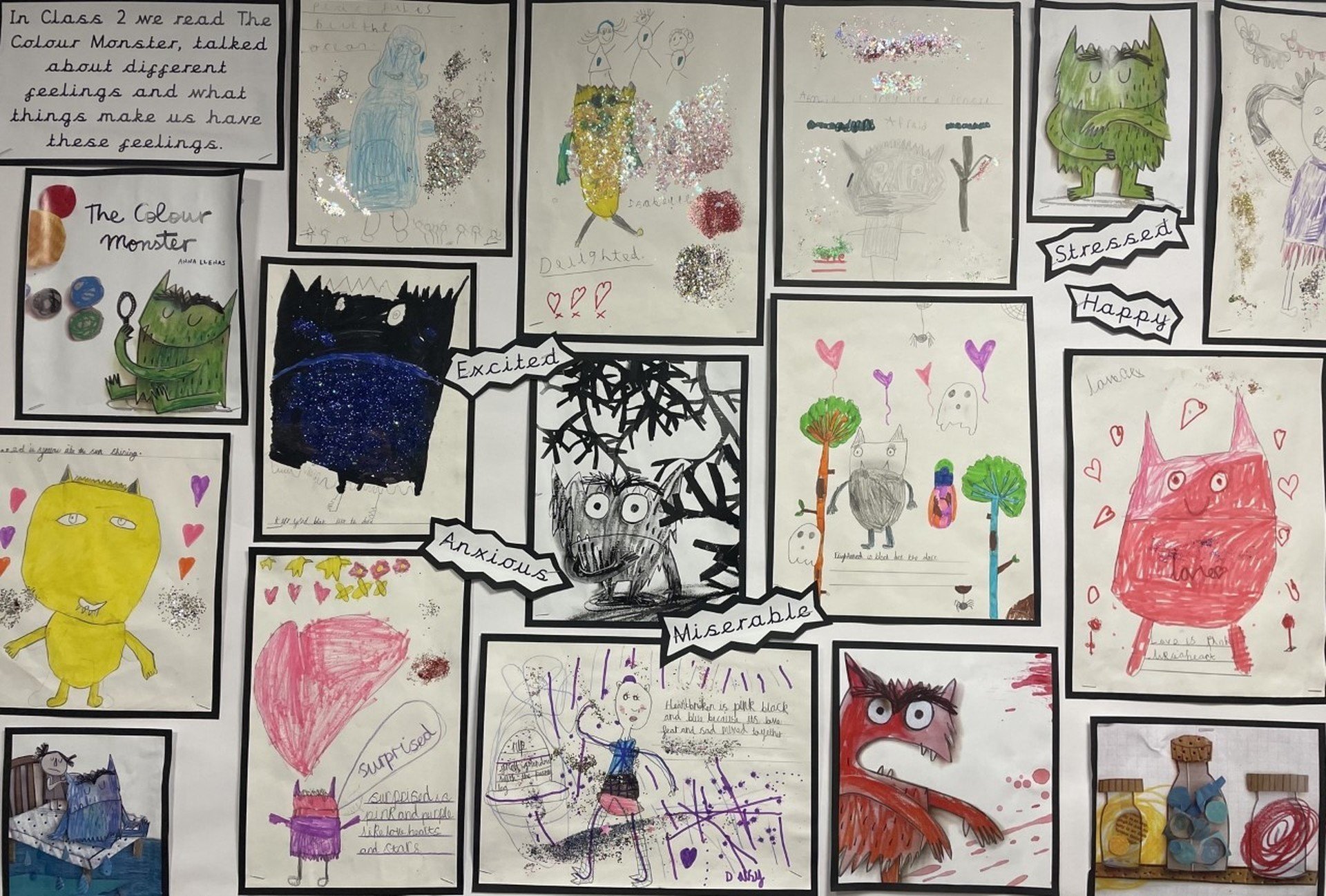 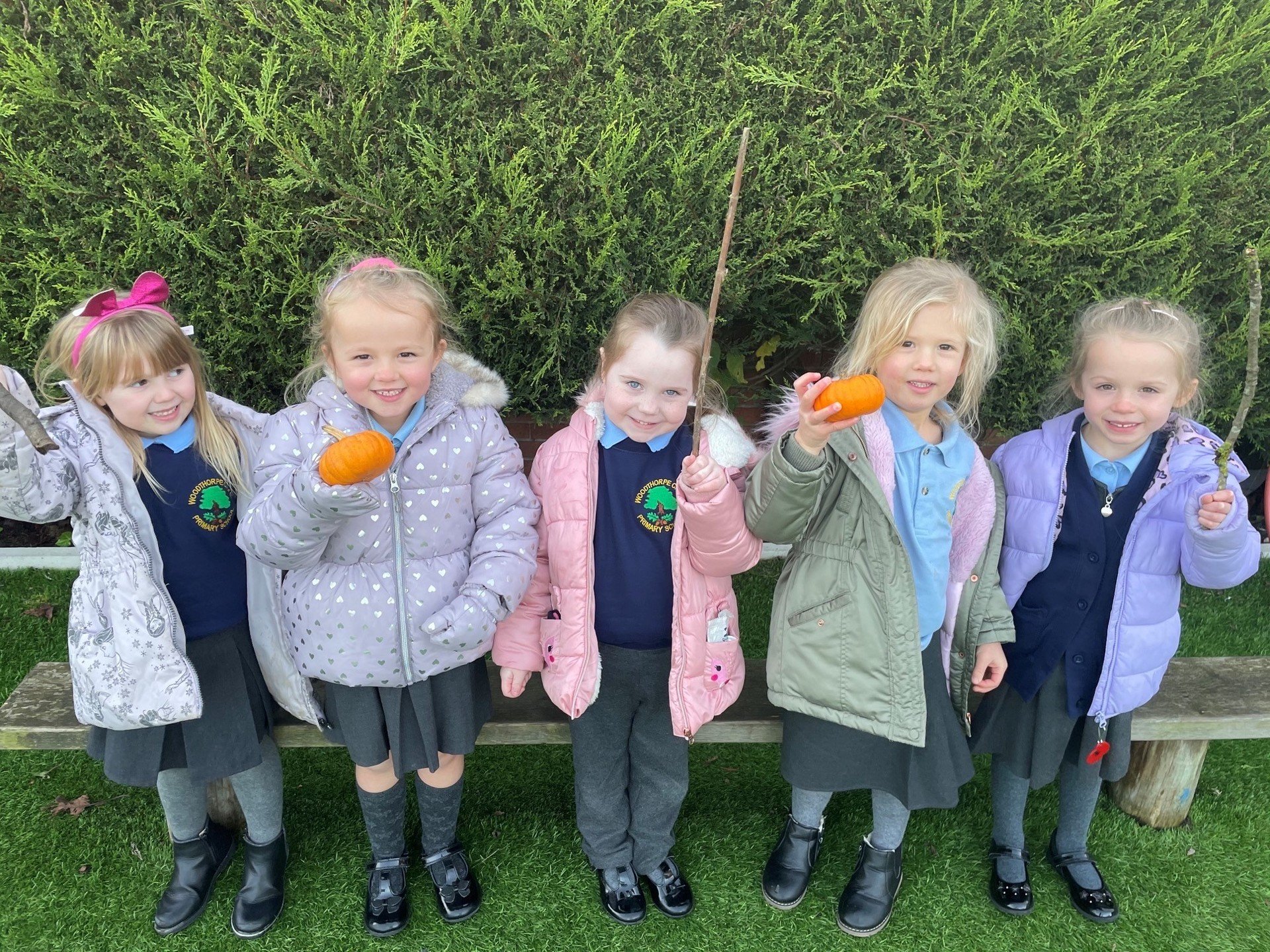 The Past and the Present

It is said by many that the heart of a village is its school and we at Woodthorpe C of E Primary School certainly believe that the school is an integral and sustaining part of village life.

Thanks to research undertaken by former Headteacher Peter Wright when writing his book “Seymour & Woodthorpe Village & School – in Times Past”, and information extracted from archive material now held at County Offices at Matlock, we have been able to put together a history of the education provision in Woodthorpe from 1842 to the present day which we hope you will find interesting.

Our story begins with the bequest in the will of a Mrs Yates, who died in 1721, leaving £50, the interest of which should be used for “the teaching of poor children to read”.  A similar bequest of £100 was made by Lady Cavendish in 1734.

Records really began in 1846, when it is recorded that Martha Haslam ran an Academy in Woodthorpe.  It was believed to have been housed in a single roomed stone building which stood on the present playground area of the school.  Miss Haslam was succeeded as Headmistress by Miss Anderson who lived at Thompson’s Farm (once known as Elderberry Cottage) in the village.

There is no documentary evidence to prove that Miss Blunden follow Miss Anderson as school mistress, but given the time span from 1846 (Miss Haslam) to 1862 when the admission register for that year bears Miss Blunden’s signature, dated 17 February 1862, it can be reasonably assumed that upon Miss Anderson’s retirement and with the growth of the school’s roll, that the school accommodation was extended and that Miss Blunden took over the running of the school.  From 1862, a continuous thread of education can be traced.

The school premises which are still in use today were built by William Cavendish, the 7th Duke of Devonshire KG during 1861/1862 no doubt as a response to the rapidly increased population in nearby Seymour.  By the time the school was ready to open, a master’s residence had been erected and the intended school roll was to be 258 children aged from 5 to 13 years.  It is hard to imagine fitting 258 children in to the current site even though three further classrooms and indoor toilets have been added to the original buildings over the years. With a present day roll of 120, we still struggle for space at times.

In 1876 the inspectorate had reported that accommodation at Woodthorpe was inadequate and that either a Board school should be set up to provide the necessary improvements or the local representatives i.e. the Duke of Devonshire and Staveley Iron and Coal Co Ltd (who both contributed an annual subscription to the school), should provide funds to improve the accommodation.

In the 1876 report, the inspector also wrote that “There ought to be a master appointed to manage the school, which must also be very materially increased in size.  The present teaching by a woman (Miss Blunden) is not satisfactory”.  In October 1872, Miss Blunden had married Mr Jerrison Frith who took over the “mastership” of the school in 1878.  Mrs Frith then became the Infant Mistress while her husband took on the supervision and overall responsibility for the school.

The inspectorate made annual reports on the school, pupils, teachers and Head’s progress and during the 1880’s and ‘90’s, dire warnings were issued that unless the children’s examinations improve, the school would be rendered “inefficient” with the consequent reduction in the Head and teachers’ salaries by the withholding of the annual government grant.  This was the era of “payment by results” and should this be the case today, the school would be cash rich.

Mr and Mrs Frith continued to run the school, on generally successful lines (according to the inspectorate) until Mrs Frith’s retirement in 1905.  Mr Frith retired in April 1910 after being at Woodthorpe for 44 years.

Mr Henry Gascoyne of Staveley, took over the running of the school following Mr Frith’s retirement and his tenure of Headship saw many changes.  He not only widened the curriculum in response to his own theories and the inspectorate’s demands but encouraged the children to learn from their environment by taking them on nature walks, visits to places of local interest and encouraging the teachers to visit other schools, to observe current practice elsewhere.  This approach to teaching and learning has stood the test of time and is common place in every school across the country today.

It was during Mr Gascoyne’s period as Headteacher that the first major structural alterations took place in the school and an additional three weeks summer holidays were granted in the summer of 1912 to enable the large room to be partitioned and the two smaller rooms to be divided with glass partitions and walls. 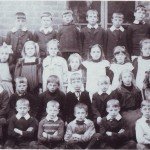 Mr H Gascoyne with a group of “upper standards” c.1912 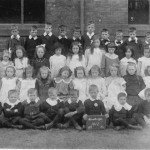 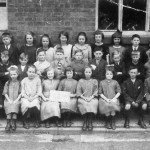 World War I took place during his Headship and school log books record many events of local interest during this period including mention of the great anticipation of all the children as they congregated in the school hall waiting to listen to King George V on a wireless that had been loaned to the school especially for the occasion.  In February 1916 the visit of the zeppelins to the neighbourhood is recorded as is the forced landings of two aeroplanes in Mr Lee Arthur’s field, adjacent to the school garden in May 1918.  The entire school went out to witness the event.  No such thing as risk assessments in those days!  One plane was damaged severely, the second suffering engine trouble.  Fortunately none of the three British airmen suffered injury. 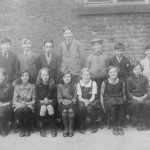 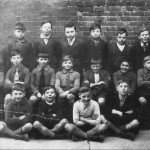 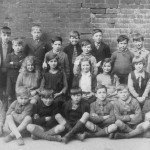 Mrs Agnes Laws was appointed Headmistress in April 1932 and stood at the helm for 26 years.  During her headship the school underwent considerable organisational changes.  One of the most significant of these changes was in January 1939 when the school ceased to be maintained as a mixed county school catering for children aged between 4½ and 14 years but became a primary school for 5-11 year olds, with the senior children attending Middlecroft Secondary School or Netherthorpe Grammar School.

The closure of Seymour Colliery in 1918 saw a gradual fall in the school’s roll to that of around 100 by the middle of the 1930’s.  Given the limitations of the school buildings, this reduction came as a welcome relief and enabled Mrs Laws to make many educational and curricular advances during her period of headship. 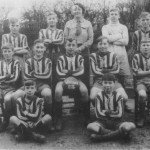 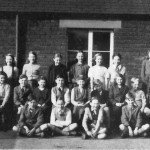 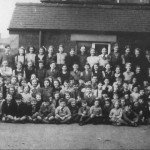 On the outbreak of war in September 1939, the children were given an enforced extra holiday which lasted until November 1939 while air raid shelters were built and appropriate black out materials provided.  The school log books show details of the school’s air raid evacuation plan whereby children from outside the village would be sent to take shelter at the homes of children from the village as they lived too far away to be able to get home in the allotted time.  It was during this time that school meals became established, provision of milk commenced and the school field was lost to agriculture as food requirements took an obvious priority.  The children didn’t get their playing fields back until the late 1970s.

In 1955 Mrs Laws appeared in a television programme about Derbyshire Schools along with the Director of Education for Derbyshire, Mr J Longland.  Following Mr Longland’s visit to the school for this prestigious event, major renovations to the building quickly commenced.  New floors were laid, pin board erected, plumbing, wiring and decorating, all taking place together.  Because of the magnitude of the disruption and to enable to school to be fit for the children to return, the children were given an extra week’s holiday.

Mrs Laws retired in 1958 after 26½ years of dedicated service.  Her devotion not only to the school but also to the local community was remembered fondly by many living in the Staveley area.  As a mark of their respect and as a living tribute to her life and work in the village, a flowering cherry tree was planted near to the telephone box on the junction of Bridle Road and Norbriggs/Woodthorpe Road following her death in 1970.

In 1959, Mr Thomas Frank Milner took over the leadership of the school and he remained in post until 1975.  It was during Mr Milner’s reign that audio visual aids started to be used in school such as televisions and tape recorders.  During the early 1960s the school role steadily increased to over 100 children.  They were taught by the Headteacher and two other staff; the Education Department being reluctant to sanction an increase in the staff which meant class sizes being 40 pupils per class for over two years. 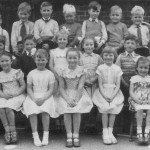 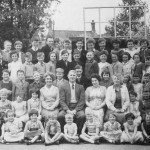 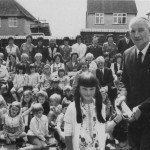 Subsidence from underground workings in the 1970s caused significant damage to the fabric of the building.  Supports were erected and the chimney stacks reduced in height.  The effects of the subsidence continued throughout the 1970s and became so serious that in 1979 during the headship of Mrs Joyce Newman (1975-1984), the entire north side of the school was dismantled and rebuilt by the National Cola Board.  Mrs Newman’s accounts of the era complain about the appalling state of the school only a weekend before re-opening in September 1979.  The entire staff spent their weekend trying to prepare the building for the pupils’ return.

Mr Peter Wright became Headteacher in 1985 during the era of computer and calculator education. He experienced the same problems as previous heads with regards to the upkeep of such an old building along with occasional visits from families of mice!  With a falling pupil roll, staff restructuring meant the redeployment of Mrs Ravey to Cresswell Junior School. 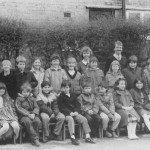 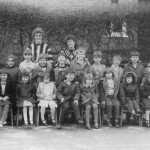 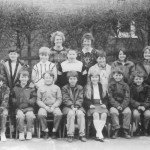 Unfortunately, with computers becoming more common place, hand written log books were used less and less and major events in the school’s life have not been officially recorded.  Our next section is drawn from the memories of current staff.

Mr John Marlow started his tenure as headmaster in 1989 and one major event during his time at Woodthorpe was the provision of indoor toilets!  Although that isn’t the only thing that he is remembered for, for those who had to suffer sitting in the outside toilets during Woodthorpe winters, it is certainly an important event to recall!

Mrs Margaret Wells started her 10 year headship in 1997 during which time she developed the outdoor areas of the school.  The gazeebo was erected with paved areas and flower beds developed around it.  A climbing area was also created outside Class 1. 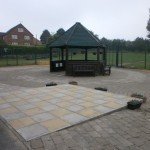 Gazeebo in the Garden Area 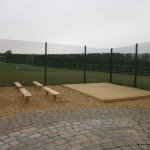 Outdoor Stage in the Garden Area

After her retirement in 2007, Ross Griffin became Headteacher.  Mr Griffin had a great love of sport, particularly football, and developed further the school football teams.  Security fencing to the rear of the school was erected and a wild flower meadow established during his time at Woodthorpe.

In 2011, Mr Simon Fuller took over the mantle (2011-2013).  Another keen footballer, he further developed sport at Woodthorpe and oversaw major redevelopment works at the school which included a further classroom, community room and additional toilets. 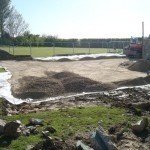 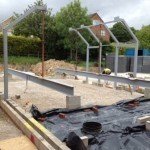 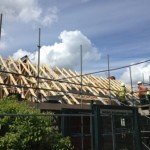 The next Headteacher, Mrs Eileen Gunton, began her reign in 2013 and so far during her Headship, the outdoor learning environment has undergone a major refurbishment and the school has continued to grow academically.  In 2016 the school was judged to be “outstanding” following a Church Schools’ Inspection.  Also in 2016, security fencing to the front of the school was completed. 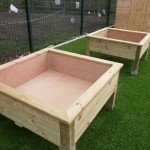 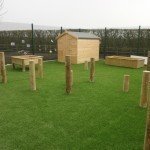 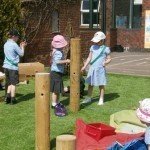 Outdoor Learning Environment being put to good use

The Summer of 2018 saw the commencement of building works to improve the School Office and Reception Area facilities.  A new Office was built and the existing Office made in to a dedicated Reception Area creating a much more welcoming entrance to the School.  Work was completed in December 2018.

Mrs Helen Walker was then appointed as the new Headteacher from January 2019.

If you or any family members have any memories that you wish to share with us of your time at Woodthorpe School, we would love to hear from you.